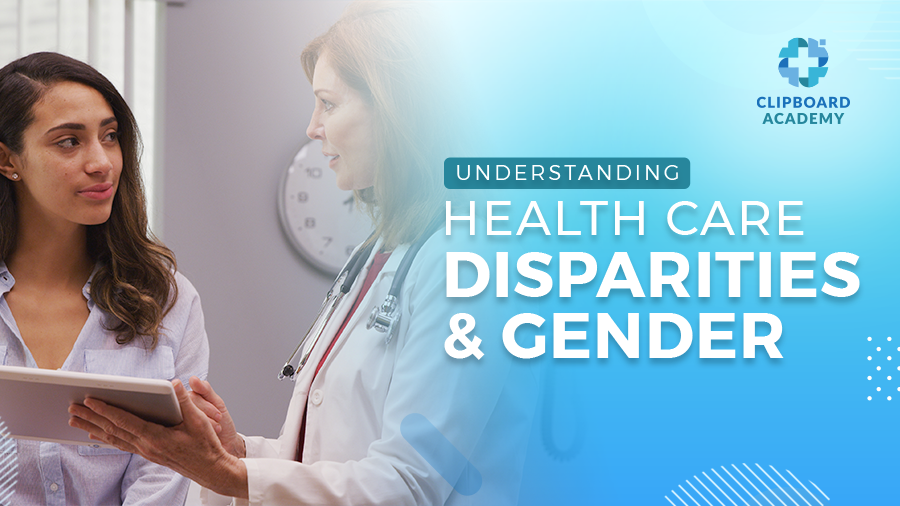 Health care is a complex field. Everyone experiences health and medical services differently, and those differences are often related to who we are — our race or ethnicity, gender or sex, where we live, our genetics, and so much more.

There are many differences between patient demographics on how people experience health care. These differences are called disparities, and they affect everyone, regardless of whether or not we realize it.

Gender disparities in health care is a topic that covers many areas of a person’s health and life. Not only does it include how they experience illnesses, but it’s also present in how people of different genders access resources and what resources are available for them.

Below are just some of the ways that gender disparity can affect how our patients experience health and health care services.

Signs and Symptoms of Illnesses

People of different genders may have different symptoms when they experience an illness. Sometimes, the common symptoms of an illness that we’re taught in school or in the field are based on studies done on one particular gender.

Those symptoms become the norm, even though they don’t represent the majority of patients. One prime example of this sort of gender disparity is heart attacks. The classic symptoms you might know best are based on many studies that looked primarily at middle-aged men.

Most medical professionals, and even people not in the field, recognize the classic symptoms—numbness or weakness in the left arm, chest pain, pressure like an elephant sitting on the chest, and difficulty breathing. These are symptoms that are commonly portrayed in the media.

Both men and women can experience these symptoms during a heart attack. But these classic signs are most common in men. Women are more likely to have other symptoms, like shortness of breath without chest pressure or pain. They might be nauseated, vomit, feel pressure on the back, feel like they’re having heartburn, or experience dizziness or lightheadedness.

Women are also much more likely than men to dismiss the symptoms and assume they’re signs of another condition, like the flu, even when they experience classic heart attack symptoms.

They might take an aspirin if they suspect it’s a heart attack, but they’re unlikely to quickly seek emergency medical care. Women on average take about 54 hours to seek treatment compared to men, who take an average of 16 hours to do so.

Health outcomes are how we measure a person’s response to a treatment or intervention. They can be good or bad, and they’re used in various ways depending on the organization’s standards of measurement.

Health outcomes are closely tied to the health behaviors and the treatments and resources offered and available to different patient demographics.

People of different genders have disparities in what sort of treatments they are likely to receive and how often they seek or have access to that care.

These disparities are often rooted in historical treatment and views concerning different genders. Have you heard of the word hysteria? Nowadays, we use it to describe someone who is being panicked or irrational. But not too long ago, it was an actual diagnosis used specifically for women, as it was thought that the uterus caused many health problems.

Because of this, women often found their health concerns dismissed or downplayed. Although it’s gotten better in modern medicine, that stigma still often leaks its way into how health care professionals treat women.

Many women might feel like health care providers don’t listen or take them seriously when they express concerns over their health. As a result, they might receive a misdiagnosis or inadequate treatment. In general, women are less likely to have hospital stays and visit the doctor even though they may have greater health care needs.

On the other hand, men are in general less likely to seek medical care, and one glaring example is in the case of mental health. Some men may feel like looking for help or admitting they have a health condition as a sign of weakness, and that stigma can sometimes prevent them from seeking the care they need.

For men and women, many health care disparities are simply a combination of a lack of understanding from both health care professionals and patients as well as ongoing stigma and long-held assumptions in society about gender.

Should I Be a Nurse If I’m Afraid of Needles?