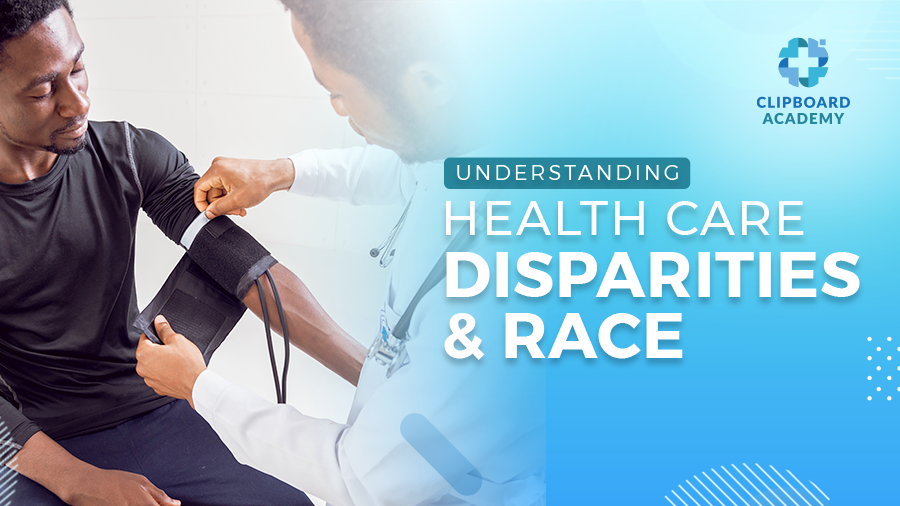 Whenever we in the health care field talk about health care disparities, it almost always includes discussions about race. A person’s race and ethnicity play huge roles in how and if they access health care, in the diseases and illnesses they’re at high risk for, and in the health outcomes that they commonly have.

Understanding how race affects someone’s health is vital for health care professionals to be culturally competent and empathetic in providing quality patient care. Here’s what you should know about health care disparities by race.

Racial and Ethnic Disparities in Health

There are several specific patient demographics that are routinely affected by disparities. Those groups include the following:

These patient demographics are historically affected by systemic inequality that has major impacts on many aspects of their lives and, as a result, their health.

Each racial and ethnic group’s situation varies slightly due to genetics, stigma, and social history, making the topic even more complex. That means this topic is as diverse as the populations it affects, but here are some of the most common and noticeable ways they are affected.

With limited or no health insurance, patients are less likely to seek medical care for preventative measures or even when they need care, like for illnesses or injuries. If the illness is severe, then the longer they wait, the more likely the ultimate outcome will be negative.

Additionally, people in affected demographics are more likely to be living in poverty compared to Caucasians. The lack of income affects not only their ability to pay for health insurance or health care, but it also affects their ability to buy healthy food or engage in healthier behaviors, which also has major impacts on overall health and wellbeing.

Many minority patients, particularly Black Americans, don’t trust doctors as much as other patient demographics. Whether because of their own personal experiences of being discriminated towards by health care professionals or due to the historical cultural and societal discrimination towards them, like in the Tuskegee Syphilis Study (see the link above), that distrust has a negative impact on their health.

When trust isn’t present between a patient and their physician, then the patient is much less likely to do the following:

So how can health care professionals win the trust of minority patients? On the whole, non-white patients are much more likely to have better care and better health outcomes if they have doctors of minority ethnicities.

Researchers even estimated that if this strategy of matching minority patients with minority doctors was applied to all Black American patients, it would decrease the disparity between Black and white Americans concerning heart disease by almost 19%.

Unfortunately, the universal application of this would be nearly impossible as the demographic of doctors currently stands. Around 56% of doctors in the United States are white, and only 5% are Black.

Many people might be inclined to believe that diagnostic procedures for common diseases are the same for everyone, regardless of their ethnicity. But unfortunately, that’s not always the case, and some processes rely so heavily on the patient’s race and ethnicity that they may cause disparities.

In particular, a recent study looked at a common diagnostic formula used to determine kidney function in patients with chronic kidney disease. The formula in question calculates a patient’s score differently based on if they are Caucasian or Black.

Researchers in the study found that one-third of the Black patients studied would have been given a more severe category score for their kidney disease if all of their statistics stayed the same for their formula except their ethnicity. In particular, 64 of those cases would have been recommended for kidney transplants.

This example is one of many, whether it’s the NFL using a formula that assumes Caucasian players have a higher cognitive function than Black players or the American Heart Association’s guidelines for heart failure risk automatically giving Black patients a lower risk score based on their ethnicity.

Genetics do play a role in increasing or decreasing the risks of many diseases, but how they work alongside race and ethnicity is still not clearly understood. In the meantime, health care professionals should be aware of any potential disparities that might exist in the diagnostic processes they use for all their patients.

Each patient demographic has certain health concerns that are more common in their demographic than in others. Initially, many people believed that genetics was the main factor at play for those common issues, but more and more studies have found that health care disparities like societal factors and access to health care have much more of an impact.

The full picture of the common health care concerns for each patient demographic still isn’t entirely clear. More and more studies look into the issue every year, in an attempt to find ways to prevent many of these illnesses and close the disparity gap between patient demographics.

Racial disparities in health and health care is a complex issue, rooted in historical influences that are still widely felt today. Health care professionals need to continually learn more about these disparities and how to help close the gaps throughout their careers to make a better system for the patients and health care workers of tomorrow.

COVID-19 Guide For Nurses: What You Need to Know

How to Avoid Nurse Burnout

PTSD in the Nursing Field: It’s More Common Than You Think