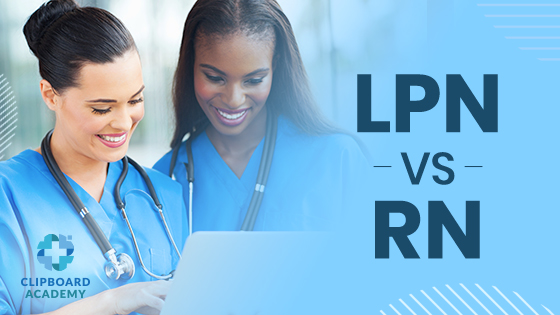 For many people not familiar with the nursing field, it’s easy to assume that the person taking care of you at the hospital or clinic who isn’t the doctor is a nurse of type. But if you’re interested in working in the health care field as a nurse, knowing the difference between types of nurses will have a major influence on how you go about starting your career.

If you’re looking into nursing as a profession, here’s a rundown on the differences between two of the most common nursing careers, a licensed practical nurse (LPN) and a registered nurse (RN).

What Do I Need to Do to Become an LPN or RN?

The primary difference between an LPN and an RN is the education requirement. In terms of licensure, an LPN is a nurse a step above a certified nursing assistant (CNA) and a step below a registered nurse (RN). And that’s down to how much time you’ll spend doing classwork and clinical hours — you’ll need a lot more of both to become an RN than to be an LPN.

How to Become an LPN

LPNs are also called licensed vocational nurses (LVNs) based on the state you live in. LPN programs usually don’t require as much clinical and classroom time as RN programs, so they can be cheaper and faster to finish. Most of the time, it’ll take you about a year to a year and a half.

If you want to be an LPN, there are several paths you can choose from:

Many times, they are part of a year-and-a-half to two-year nursing program where getting your associate’s degree in nursing and becoming an RN is the end goal. These types of programs will usually get you to where you can sit for the NCLEX-LPN exam at the end of your first year before continuing the program to become an RN.

How to Become an RN

RN education is a little more confusing than LPN requirements as there are two options within the RN field.

You don’t need a bachelor’s degree to be an RN. Many programs are associate’s degree programs. But depending on what program you go through, you can qualify to go further with your education and get a bachelor of science in nursing degree, or BSN.

Some areas of nursing prefer to hire RNs with a BSN and will say so in their job postings. So it’s worth it to have an idea of where you want to work in your career, either right after you graduate or in the future, so you can decide now if you want to go for a BSN program. BSN programs are usually separate programs at universities that you apply for after you become an RN. You can usually find more information through your state’s board of nursing website.

What program you choose to become a nurse will determine whether or not you can move to the next level of nursing if that’s in your gameplan. Some LPN programs will get you your LPN license, but if you ever want to move on to become an RN, they might not count toward that education. At the same time, some RN programs won’t qualify you for a bachelor’s degree or going further to be a nurse practitioner.

This has to do with something called accreditation. Programs that are accredited have met a set of strict requirements and are approved by your state’s board of nursing and often a national organization. Going to an accredited school usually means that education will transfer to another school or program if you want to go LPN to RN or RN to BSN.

What are LPN and RN Responsibilities?

LPNs and RNs are both nurses. They both go to nursing programs and take a national nursing exam to get a license. But there are differences between the two types of nurses that can affect which one you decide you want to be.

What LPNs Can Do

LPNs don’t require as many clinical hours or classroom hours as RNs do, so some of the duties they can perform will be limited and more focused on basic nursing care compared to an RN. An LPN works under the supervision of an RN, so they can’t be charge nurses or nurse managers.

What LPNs can do exactly will vary by state based on what the state board of nursing decides. In some states, LPNs can’t take orders from a doctor or do much with intravenous (IV) therapy. Sometimes, an LPN in these states can get certification for IV therapy, but that’s extra time and money and only useful if you’re working somewhere that needs those skills.

But LPNs are still nurses and work in many places that you’d think to find nurses. They can give non-IV medications, insert and take out catheters, and provide basic nursing care to patients. They educate patients and work with RNs and doctors to make sure their patients get the best care they need.

What RNs Can Do That LPNs Can’t

RNs are the next level of nursing after LPN, so they can do everything an LPN can do and more. They can do IV therapy and work in management positions and research, and it’s much more likely for an RN to be able to find a job in a speciality unit, like neonatal intensive care in a hospital.

What Do LPNs and RNs Make?

You’ll be likely to be able to find a job as an LPN over the next few years, as demand for health care professionals will only increase with the aging population of baby boomers. The U.S. Bureau of Labor Statistics tracks job growth for LPNs at about 11% over the next decade, which is faster than the average for other jobs in the U.S.

For RNs, the median pay per year in 2019 was $73,300 or $35.24 per hour. Again, what you end up getting offered as an RN will vary based on where you live and where you work. Certain specialities will pay more for a qualified nurse than others, and the options where you can work are incredibly varied. And places with lower costs of living will likely pay lower than cities with a higher cost of living, just like any other job.

The average job growth for the next decade for RNs is about the same as for LPNs at 12%. Again, the aging population will make being in the health care field a valuable and stable place to be.

Night Shift Nurse: Are You Cut Out For the NOC Shift?

Charge Nurse: What Is It & How to Become One

How to Become an LPN/LVN