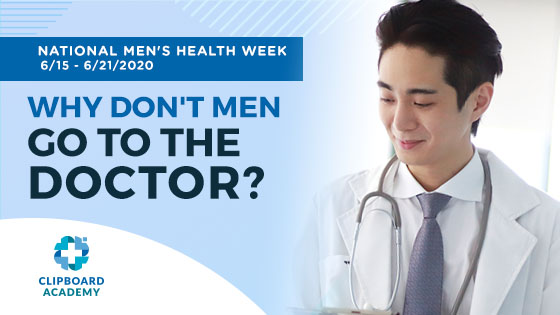 Every year in the United States the entire month of June is dedicated to men’s health activities, with the big push being National Men’s Health Week, which is celebrated the week leading up to Father’s Day. It was passed by the Senate in 1994 with the goal to simply to increase health awareness in men of all age groups and to seek primary care and preventative care for any health issues that could be detected early.

The Cleveland Clinic publishes an annual survey that shows the rates and reasons why men are making fewer doctor’s appointments than women, on average. They have been campaigning with the slogan “MENtion It” as a nod to the fact that many men wait so long to bring medical issues to physicians, that by the time they seek treatment, the issue has advanced to a degree that it can no longer be treated with the least invasive measures.

The Survey Shows … Many Men Would Rather Suffer

These numbers, while alarming to see on paper, make total sense. There is the perception as a man, that you should be able to handle your own business, and that seeking help or guidance may be perceived as weakness. Studies also show that men typically don’t enjoy hearing about their lifestyle choices such as drinking, smoking, and eating habits and they already know those areas need improvement. In fact, lifestyle choices are one of the most common health indicators physicians can make preventative recommendations from, as well as family history.

In the month of June, men will be encouraged and reminded to make an appointment with their primary care physician (PCP) and undergo some diagnostic tests to ensure they are in good physical and emotional health. These tests will give men and their doctors a glimpse at specific health issues that men face.

A Physical Gives a Baseline

Men need to see their primary care physician at least yearly for physicals if not more often if systems are present. Establishing baselines for blood pressure, weight, blood glucose and cholesterol, and keeping records of those numbers throughout the years, is essential because you can watch to see if they are changing over time. With this information, doctors will be able to treat things as they come up and before they become major health issues.

A prostate screening for cancer is important for men over 50, especially. There are two types of recommended screenings, the Prostate Specific Antigen (PSA) which is a blood test, and a Digital Rectal Exam (DRE) where the doctor feels for any abnormalities on or around the prostate.

Some men may be at higher risk for prostate cancer and they should schedule a screening earlier, rather than later. If you have family members who have had prostate cancer, or you are African-American, or a Caribbean man of African descent, you should consider a screening around the age of 40 to 45.

Testicular cancer is a type of cancer more prone to develop in younger men. It’s important that males understand how to perform a self-check and that they are doing so correctly. If you perform self-checks routinely and accurately, you should be able to identify changes and report them back to your health care provider promptly so they can be addressed.

During yearly physicals, a primary care physician (PCP) will inquire about mental health, and it’s important for men to be honest about any life stressors, distressing events, and general mood levels. If any persisting emotions that are affecting men negatively are addressed, the PCP will be able to make the necessary referrals and keep it on their radar. Men are less likely to seek treatment for mental illnesses than women, according to the National Institute for Mental health (NIMH). For various reasons, men are more likely to die of suicide as the figures of the Centers for Disease Control and Prevention (CDC) show.

Shifting the Mindset For Future Generations of Men

The more men understand and are encouraged to take their health into their own hands, the better their outcomes for early reporting of preventable diseases. We all need to campaign together to get more men seen by their PCP at least once a year for a baseline physical. The more they go, the more comfortable they will get with discussing issues men may perceive as oversharing and uncomfortable. Partnering with places where men typically hang out such as golf courses, cigar lounges, and athletic clubs, will hopefully help outreach and get men scheduled with their PCP.

There is good news, however, as the younger generation is very tech-focused, so health websites have been helpful tools. They have helped shift how these young men are increasing their basic health knowledge. So it’s safe to say the curiosity is there, but getting them into the office is a work in progress.

For more information on this topic, to see a full list of participating organizations, and to see how you can get involved, visit the National Men’s Health Month website.

Justine Nelson RN, BSN, has been a registered nurse for over 11 years with experience in home health, community health, school based nursing and healthcare based tech startups. Justine is passionate about developing new and innovative roles for nurses outside of traditional nursing roles. She currently serves as an RN content Specialist for Clipboard Health.

COVID-19 Guide For Nurses: What You Need to Know